The magnetic compass is probably the best known compass model and consists of a magnetized needle pivoted over a horizontal plane. Its freely movable magnetic needle aligns itself in the magnetic north direction on the basis of the earth's magnetic field lines. These lines traverse large areas of the earth in the geographical north-south direction. Since the existing deviations are known relatively exactly, the geographic north direction can be concluded precisely. From this, in turn, it is possible to derive the other cardinal directions as well. Thus, a magnetic compass helps you to safely navigate through the maritime environment.
.. read more
Cookie preferences
This website uses cookies, which are necessary for the technical operation of the website and are always set. Other cookies, which increase the comfort when using this website, are used for direct advertising or to facilitate interaction with other websites and social networks, are only set with your consent.
Configuration
Technically required
These cookies are necessary for the basic functions of the shop.
"Allow all cookies" cookie
"Decline all cookies" cookie
CSRF token
Cookie preferences
Currency change
Customer-specific caching
Individual prices
Selected shop
Session
Comfort functions
These cookies are used to make the shopping experience even more appealing, for example for the recognition of the visitor.
Note
Statistics & Tracking
Affiliate program
Google Analytics
Track device being used
Categories
Information
Filter öffnen
No results were found for the filter! 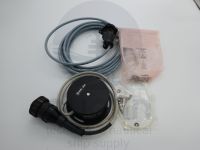 How does the Magnetic Compass work?

Besides today's GPS, the gyro compass and the magnetic compass are the most important types of compasses for navigation in shipping. Today, the magnetic compass is prescribed as an emergency compass. It is usually placed on the top of the deck above the bridge in the midship line for compensation purposes.

The use of the magnetic compass does not require electronics or any other power supply, which gives it an advantage over more technical navigation devices. In addition, determining course angles is often easier and more accurate as magnetic orientation is used.

The errors of a Magnetic Compass

Unfortunately, the magnetic compass orientation has two serious errors that must be taken into account during navigation:

Since the magnetic North Pole does not coincide with the geographic North Pole, and lies about 1000 km north of Canada, the result is a misalignment. Besides, the magnetic poles change by several km per year. At the true north, the magnetic compass would point to the South. High northern latitudes lead to errors up to 35 degrees. In the North Sea and Baltic Sea however, the errors are only a few degrees. In the nautical charts, lines of the same declination are drawn – with these lines you can find out the declination for your current location, which helps you to navigate correctly. The declination has positive and negative signs depending on the location.

Another error is that the deviation of the reading is also possible. If other magnetic fields are near the compass, they distort the orientation of the magnetic compass needle (so-called magnetic field effects). Such a deviation can occur with magnetic or magnetizable objects that are loaded on the ship as well as with flowing or alternating current. Since ships consist of soft iron masses, which have their own magnetism, the magnetic compass is deflected. It is so large that it would be useless if it were not compensated. The compensation is done by bar magnets, which are placed at 45 and 135 degrees under the rose, so that they compensate for the diagonal magnetic fields.

The most important thing a compass should do at sea is steer the ship on a fixed course with an accurate reading. Even if there is an error of a few degrees, it can make a difference, especially while traveling long sea passages. Thus, with an inaccurate compass, delays in shipping can occur. Furthermore, it is used to scan celestial and terrestrial objects for navigational purposes. The magnetic pole needs to be accurate to travel with precision. Get your compass now at Querin!

Recently viewed
Trusted Shops Reviews Toolkit: 1.1.6
This website uses cookies, which are necessary for the technical operation of the website and are always set. Other cookies, which increase the usability of this website, serve for direct advertising or simplify interaction with other websites and social networks, will only be used with your consent. If you do not want cookies to be used, you can also reject them.
Configure Agree to all